There is so much to cover when it comes to Genesis theme customization, that I’ve mapped out an entire series of posts to throughly cover it. I’m hoping this series will help people get a basic understanding of what it takes to start customizing their own WordPress sites and have the confidence to get started.

While my specific examples will be aimed at the Genesis theme framework, most of what I share will have general application as well and can be used on most WordPress websites.

Here are some of the things I’ll be covering in this series: 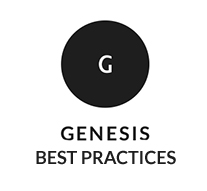 I’ll be approaching all these topics from the perspective of best practices. I think I’ve got a good perspective on that, especially when it comes to the Genesis theme framework.

When I first met Brian Gardner, the founder of StudioPress (which is the company that produces Genesis), we were at a small conference with maybe 100 people in the room. Brian was all excited because he had this idea of designing a WordPress theme that he could offer for sale. I think he might have even been coding and designing there in the back of the room during some of the sessions.

He called that first theme Revolution and when he offered his first developer’s license I bought it because I needed some themes that I could offer my clients. There are many things I do well, but graphic design is not one of them. I quickly realized Brian’s themes were perfect for customizing. So when he started StudioPress, I knew it would be top quality and purchased a developers license right away too.

All that to say, I started customizing themes years ago and have been working with Genesis themes since their inception. I’ve got a pretty good idea of how to do it right. Well, mostly because I’ve made many, many mistakes over the years.

My goal here is to help you avoid some of the major pitfalls that can crop up so that you can learn how to do things the best way possible and much more quickly than I did.

Without any further ado, let’s dive in.

Why Customize Your New Theme?

Well there are several reasons. You may find a great stock WordPress theme that is close to what you want for your site, but maybe if you could just change the colors it would be perfect. Or maybe a few small tweaks to the way the content is laid out would make it fit your own situation so much better.

Stock WordPress themes are made for a general category of sites. They are designed to be as appealing as possible in a variety of situations. Often that means there’s a theme that will get you in the ballpark of what you need for a site, but it may need some tweaking to make it exactly what you need.

Bending WordPress to your will and making it uniquely your own is empowering. One of the best ways to learn how to work with WordPress is to look “under the hood” so to speak and see how other people have coded up stuff.

That’s exactly how I got started. Back in 2005 I setup my first WordPress site. It was a hobby blog and I didn’t have any kind of income associated with the site. That meant I needed to do everything on the cheap, which meant if I couldn’t figure it out myself it didn’t get done.

So I found some free themes that I thought looked cool and looked at the code to see how they did things. Whenever I could see how someone else did something I was able to take what they did and modify it to my own needs. I still do the same thing even today. (Shhh! Don’t tell Rebecca!)

It was a truly wonderful day when I discovered that my web browser would let me view the source code of a website with a simple right click of the mouse. “Oh, so that’s how you do that!”

Tinkering was my thing. Because it was a hobby site there were times when I would do things that I knew would crash my site just so I could see what it would take to fix it. While I don’t recommend that approach, it sure made the dreaded WordPress “white screen of death” much less intimidating.

You can build a great freelance business simply with the ability to customize WordPress themes. There’s a really big market for people who are good at Genesis theme customization in particular. You will have to invest some time on your own to learn the skills needed.

In my case not only did I tinker with my own sites, but new friends that I was meeting online would say, “I saw what you did with your site. Can you help me with mine?” Eventually it got to the point that I was “helping” so often that I realized some of those folks would be glad to pay me. So I put together a plan and left my job to do this full-time.

It took me nearly 2 years to learn the skills I needed to be able to start charging folks. But theme customization was one of the key skills I used to earn a living in those early days.

A Warning About Customizations

You should know that customizing WordPress themes is not for everyone. If you’re going to start modifying your themes there are some things you’re going to need to learn. You’re leaving the comfortable world of drag-and-drop and a-setting-for-everything.

You’re stepping into a world of true power where you can control your own destiny.

Ok, that may be a bit over the top. But you are going to have to take off the training pants and put your big boy (or big girl) pants on. In order to customize themes you are going to have to begin learning about the acronym soup world of FTP, HTML, CSS, some PHP, and maybe even (gasp!) MySQL. Plus, it will help if you have the ability to use an image editing program like Photoshop or Gimp.

If that last paragraph set a wave of nausea coursing through your body then you should seriously consider stopping right now. Theme customization is not for everyone becasue there are technical things involved.

There’s no shame in that. In fact I know a lot of people who are very successful online without ever messing with code at all. The key is to know the areas where you are gifted, because you know the things you are enthusiastic about and can stick with until you master them. Those are the things that add value and enrichment to your life.

So if the very thought of picking through CSS gives you the shivers, then theme customization may not be your gifting. I’m just saying.

I realize there’s not a lot of red meat in this particular post. But these introductory things needed to be said. We’ll soon be adding the rest of the posts in this series and they’ll provide lots of great information for you to dig into.

But while were still getting started I’d like to hear from you. Which Genesis theme customization topic do you want to learn about most? Is there anything over and above the list above that would you like to see discussed? If so, leave us a comment below and we’ll consider throwing it into our series of blog posts.

Did you try a DIY website audit checklist, only to find you missed the important items that would truly influence your SEO, traffic, and revenue? What you really need is a professional website audit to keep your website and SEO healthy. END_OF_DOCUMENT_TOKEN_TO_BE_REPLACED

Learn what SEO is and why it matters to your website or blog. Download the free eBook and start your SEO journey. END_OF_DOCUMENT_TOKEN_TO_BE_REPLACED

We'd love to help you create something amazing.
Reach out to us and tell us about your vision. END_OF_DOCUMENT_TOKEN_TO_BE_REPLACED